An Interview with Will Courtney
By Christina Conway for No Depression 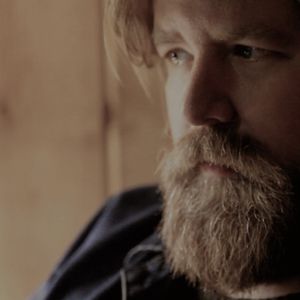 Will Courtney's 7 track solo album, A Century Behind, came out today on the label, The Calla Lily Company. It feels like a classic you already love. You can hear the warm reminders of our musical history, but they serve only as the canvas Courtney uses to paint his lyrical imagery on.

History is a good place to start. The album name and title track, "A Century Behind", speaks to a romantic past we never lived, a longing for something we only imagine. And aging, which we all know is coming, and yet still sneaks up, as Courtney's lyrics say, when "the timing is all wrong".

C-Hey Will, it's been a while. Want to jump right in there with what's behind the title track on this new record?

W-It’s a song being sung from the point of view of someone who is older, but who has never lost their passion. Perhaps it is written for my future self. I have written songs as that person before – old Will.  The title kinda sums up how I feel on a daily basis.

C-There seems to be a theme of past on several tracks here. Historical past, personal past and regret, people clinging to their pasts. Was that intentional or just where the songs went?

W-As a musician and a music fan, I do sometimes feel stuck in the past. Even as a kid I always liked older music and the songwriters from years before I was even born. I like old movies, old clothes, old pictures, old books . I write about what I know and I guess all that stuff would end up in my music in some way, but it wasn’t until I sat down to listen to the whole album in the studio that I started seeing how it all went together.

C-I know you're from a very musical family. Your mom, Cynthia Clawson, is a well known singer, and your dad wrote musicals. Do you still feel their influence when you write or perform today?

W-Absolutely. My dad is a great teacher and I learned a lot from him. He shared advice that he learned on Broadway - never be late when people are waiting on you. They’ll just replace you.  My mom taught me how to sing. The biggest thing my mom and dad both taught me is that true art is absolutely honest. It is one of these reasons that I like so little modern music.

C-Your musical influences are so varied, but I've noticed that they mostly center on the most revered songwriters. Like when I saw you at Austin City Limits a couple of years ago, of all the acts there, you were reallt jazzed to see Randy Newman. Where do you pull from when you're creating?

W-Well, I have a huge record collection. I’m inspired by a lot of stuff. I have been a Randy Newman fan since I was very young. My dad used to play Nilsson Sings Newman a lot growing up. Land of Dreams  was one of my favorite records as a kid, right next to Appetite for Destruction and Rubber Soul. When I was little, I loved movie soundtracks. I loved the music from the movie, The Natural, which I found out he was behind when I was older. I always liked music that I could see in my head.  Randy Newman always made movies with his music. I like how he takes on a character and writes a song from their point of view. I do that a bit in my songs, but I think making records is kinda like taking different characters in music and putting them in the room and recording their conversation. You got George Harrison talking to Merle Haggard and Jimmy Webb and Elliott Smith and maybe 80’s Chicago and then you have this new sound.

W- I always have an acoustic guitar near me ready to go. I recently set up a little home studio and have been playing the piano more now that I have the space. There are different ways to write. Some people write the lyrics first, which I do sometimes, but I generally come up with the music first and I kinda hum the melody and mumble the phrasing and the sounds of words. Then I am looking down at the page and I have these very clear thoughts. I think that is why many songwriters talk about the songs coming from another place, from somebody else. I think that if you truly listen and you’re honest about what you hear, you’ll find that your inner self I revealing a lot of truth. Songs are sometimes like a conversation with your spirit.

C-I've been playing these songs a lot lately, and they feel so vast yet calm, like a great lake on a peaceful day. Such a perfect balance. I especially love the Steven Fromholz cover, "I'd Have To Be Crazy". Simple, and pure. It says it was recorded in a cabin, how was that solitary process compared to creating with a band?

W- I love that song so much. When I moved away from Austin, I spent a lot of my time alone, writing and recording demos without other musicians. I was moving around a lot between LA and Nashville and Maine and the cabin in Dripping Springs, but I always had a microphone, guitar and my computer and I kinda got comfortable just being alone to figure out how I wanted a song to ultimately sound. By the time I recorded this record I basically had demos that sounded like a crappy version of the final album. So, I guess the process is lonely, but I like the results.

C- Man, since I've known you, you've moved at least five times, yet you always seem at home where you are. What keeps you centered in your music?

W-I think it’s because when it all comes down to it, I’m moving because of music. Every place I’ve decided to try out is because I find the town inspiring and comfortable. Each place has different songs to give. In the end it is all about the song and where I need to go to find it.

C-The picture on the back of your record, do you want to share its secret? It's very sweet.

W-Yeah, I guess it is sweet. Well, it’s the photo we used on our wedding announcement. It’s actually a real Ambrotype that was taken by a guy from New Hampshire. I saw this guy at a Civil War reenactment when Melissa and I were living in Maine taking photos of the soldiers and asked if he would come to the house and shoot some pictures. I liked it a lot and figured it went along with the title of the album.

C-The bit in your liner notes about no auto tune being used is great. What made you want to add that?

W-Thank you for asking about that. I was hoping somebody would catch that. There is a lot that is wrong with modern music, but I guess I have a personal mission to tell everybody about how Auto-Tune it is ruining music. I’m not talking about the Cher or T-pain “vocoder” sound, I’m talking about how it is on literally every single major album over the past 5 or even 10 years. Even tons of indie bands and people who don’t need it are using it. They even put it on The Beach Boys new reunion album. The Beach Boys. I wouldn’t have made it past the 30 second mark of “God Only Knows” if they had this in the 60s.  I hate it. Basically, after someone sings the song in the studio, the engineer takes a note that is a little flat or sharp and tunes it so that it is on pitch. That may not sound like a big deal to some, but we are not talking about tuning a guitar or fixing a bad snare hit. We’re talking about the human voice. All instruments are basically just mimicking the voice or the rhythms in nature. The human voice is the only thing that is actually 100% human. The voice is the reason the crowd got quiet every time Elliott Smith would sing. Happens every time my mom sings. When a singer does it right, people will cry because the vibrations in the voice touch people on a very deep, spiritual level. Can you imagine if Lou Reed came out today? “Here She Comes Now” would sound like Lady Antebellum. Basically, if a singer doesn’t like their voice, either do another take or stop trying to be a singer.

C-Oh, so you just got back from a tour in Europe with Lydia Loveless and Richard Lindgren, how was that? Where did you go?

W-It was life changing.  I loved being with Lydia and Richard. We had such a great time together. We were all strangers before the tour, but luckily we all clicked.  I would love to play with them again. We toured Sweden and Norway for 3 weeks and I saw what America could be. It’s like a clean, peaceful America with hormone-free meat, universal healthcare, delicious beer and it’s filled with the prettiest girls who listen to great music and still buy records. On my first day in Sweden, I walked into a gas station and they were selling Leonard Cohen CDs. I stopped by this bar in this small town in Norway and sat down next to a huge poster of The Byrds. They were playing Richard and Linda Thompson on the speakers and on the restroom doors they had Lee Hazelwood and Nancy Sinatra’s faces instead of the men and women logos. I still can’t believe that a place like that exists.

C-You're playing here in Austin this month. Is that your official record release show? Does that make Austin your adopted "hometown"?

W-Yeah, I guess this is the official release show. Some of the brothers from Brothers and Sisters will be playing with me. I’m trying to line one up in Santa Fe as well and then I head to California in a month to play some shows there. I’ve been apart of several music communities, but Austin will always feel like home.

C-What else do you have coming up?

W-After Austin I am playing Saturday and Sunday at the Texas Crawfish and Music Festival outside of Houston. I’ll be playing guitar with my friend’s band, Tenlons Fort, on Saturday and then playing my stuff on Sunday. I’ve got west coast dates in June and then I hope to have a bigger tour lined up for the fall. I’m ready to start recording my next record very soon.

C-Well, Will thanks so much for taking the time to answer all these questions, it's always nice to catch up with you. I have a good feeling there will be plenty more great records in your career, and I can't wait to hear them.